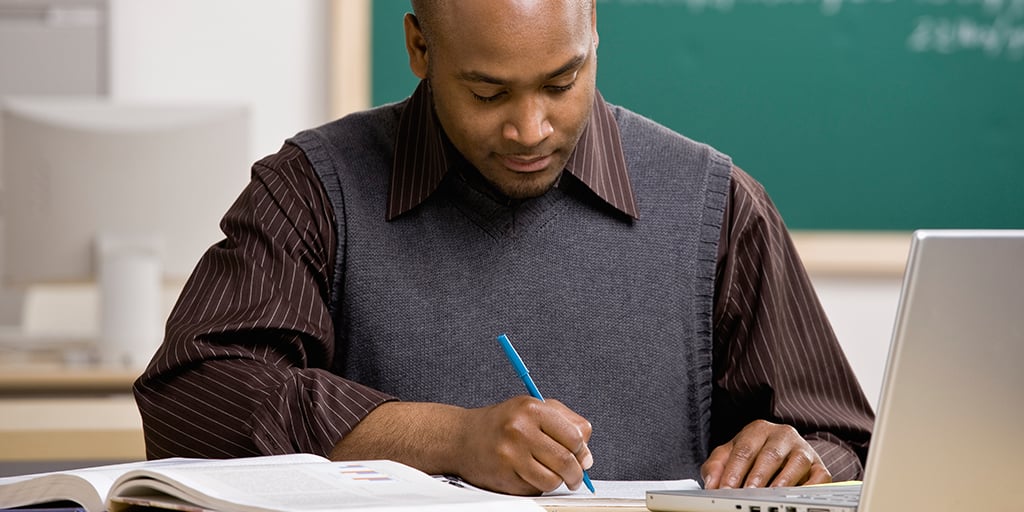 In part one of this series, we answered several questions that came up during our implementation process. In this conclusion, we focus on even more questions. Read on to see the details of how our team approached the standards-based grading philosophy:

How will a final grade be calculated?
This was a challenging question. Traditionally in schools, we have students' grades compiled over the course of time. For example, a student who might struggle with the concept at the start of a unit will have those scores count the same as the scores they receive at the end of the lesson when they have reached mastery. This all usually averages together to create a grade. But in the end, what does that grade really tell us? Through these discussions, we considered averaging all the scores through a grading period, but for us, that was what we were trying to move away from when it came to standards-based grading. We considered some sort of final assessment to capture the end of learning—we thought that might be the best indication of what a student knows about each standard. That seemed a little too high stakes though, so we settled on a compromise: We require teachers to have multiple scores for a standard, but we will average only the final three in the gradebook. This will spread it out over more than one score, and will also focus on what the student knows at the end of learning. We have also given teachers the discretion to adjust the final grade by hand if needed.

What will parents receive throughout the grading period?
In our old system, we allowed parent access to monitor assignments in the gradebook throughout the grading period, but we are ending that practice. Although it is one way for parents to help students, we felt like the standards-based scores would not be as helpful to them. We will score student work and return it to the student/parent like always, but there won’t be a running record of this accessible to the parents.

What does it look like to give feedback on social skills?
This was one of the main selling points for the standards-based grade card. Teachers try to give students feedback on soft skills like organization, responsibility, cooperation, and respect, but these never fit very well into a traditional gradebook. Teachers might deduct points for something being late, but that really has little to do with whether or not the student understood the concepts involved. By breaking out the behaviors from the learning, parents, students, and teachers all have better information. But by doing this, we had to decide how we would treat these social skills grades. We felt the scale worked for them, as there are some skills that are progressing for students and other skills that are advanced. We decided that teachers would give feedback a few times during a grading period about progress toward these skills. Behavioral skills are different than learning skills for most students. Typically, once a student has mastered a concept, the teacher knows confidently that they have it. With behavior, so many factors are involved that one day a student can demonstrate one skill, but the next day, they might struggle with it. We decided we would always indicate these skills as a point-in-time piece of feedback that can fluctuate.

Can the scores go up and down over time?
The short answer is yes, scores can move both up and down over time—but it is important that everyone understands why this might be the case. For some skills, we expect students to progress during the year. In chemistry class, the teacher would like the students to understand the periodic table of elements all year, but by the end of the year, this understanding will look much different than it does in the first few months of the year. It is possible that a student would master the skills at the start (a score of 3), but a lack of progress after that could result in that number dropping to a 2 or even a 1. Most educators would understand this logic, but it needs an explanation for parents.

What about zeros?
In the end, a teacher has to have some evidence of learning for the student. There is no chance for feedback if there is nothing to give feedback on. The difference between this and a traditional grade card is that zeros or missing assignments can be recorded and documented through the study skills portion of the grade. In both grading systems, a student must turn in work to show that learning is taking place. With the standards-based model, an assignment that is submitted separates the score on the assignment (learning) with the behavior of the student who might have turned it in late or made careless mistakes on the work.

By reading through some of the conclusions that our team came to, hopefully it can help your team to process the important decisions that need to be made as standards-based grading is implemented.

Did you miss the first part of this series? Be sure to check it out here. And to learn more about how to better assess your students, visit us online to access our collection of assessment resources, blogs, and tech.