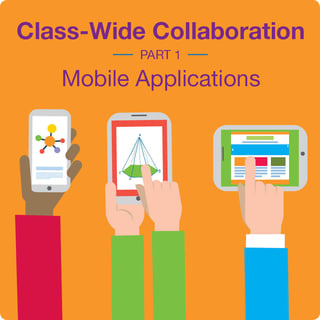 It has become clear that student collaboration is now an important focal point of modern education. The Common Core standards found in many states require that students participate in a diverse range of collaborative activities. That’s because teaching students collaborative skills has become paramount to their success in the 21st century global economy.

When today’s students enter the workforce, they will be asked to collaborate with others, both in person and via technology. To prepare students to perform their future jobs successfully, many schools have adopted curricula, materials, and lessons centered on the concept of student collaboration. Programs such as College Prep Math (CPM), which requires students to work and to solve problems together as a team, are becoming more common in schools across the country and around the world.

Many schools now recognize the power of educational technology to provide more opportunities for students to collaborate within the content areas. Typically, ed tech is used to successfully facilitate collaboration between students assigned to a small group. Each small group is asked to collaborate using various technologies to solve problems and to create content that can be shared with others. For example, a small group of social studies students might use the Internet to research a topic such as the Battle of Gettysburg, and then collaborate in the creation of a digital storytelling file about the battle. Another example of collaboration among a small group of students could include a science lab group using a device such as a Boxlight Labdisc or a science lab app for a tablet that enhances the experiment.

Ed tech can also effectively facilitate whole-class collaboration, but in practice it is rarely used in that way. This is an oversight that needs to be corrected. Once students graduate and enter the workplace, they will likely have to collaborate with large groups of people, co-workers who may be spread across the country or even around the world. In their future careers, today’s students may be asked to work on one small part of a big project that requires collaboration with a large group of people who are working on other parts of the project. Take, for example, the world of technology development, in which engineers build one part of a device but must collaborate with many others to ensure that it performs properly within the device as a whole. Educators must keep this in mind and continue to develop strategies that foster not only small-group collaboration, but also collaboration on a larger scale.

Whole-class collaboration is easier than you might think. There are a number of strategies and resources teachers can draw on, some of which we’ll cover in this two-part blog. Today let’s review the possibilities presented by mobile applications.

Mobile applications are a great way to get students involved in whole-class collaboration. One of the best tools I have discovered for engaging the entire class in a collaborative activity is the MimioMobile™ application. It’s a free app that can be downloaded onto any mobile device, tablet, or Chromebook. It can even be used to engage students who are using a computer with a Wi-Fi connection. For a small fee, educators can create engaging collaborative lessons within MimioStudio™ software. Digital lessons that encourage collaboration can also be downloaded for free from Mimio’s online educator community, mimioconnect.com.

The MimioMobile app is an example of a collaborative app that easily engages students in whole-class collaboration because lessons can be pushed out from the teacher’s computer and shared with every student in the classroom using the app – even if students are on different types of devices. The collaborative strength of a lesson is obvious when you examine the projection at the front of the classroom. Once the teacher engages “collaboration mode,” the MimioMobile software divides the classroom’s desktop projection into squares that represent each student’s contribution to the assignment. Students are able to work on their own devices but can also see the contributions of other students on the board, in real time. At any time during the lesson, the teacher can highlight one student’s contribution by making his or her work appear larger on the screen. The work of each student can be reviewed, edited, refined, and shared with the entire class. In short, the app can enable 100% participation in the lesson, while also removing the fear many students have of volunteering to participate in an activity.

In my own social studies classroom I was recently able to use the MimioMobile app to give my students a rich, technology-based collaborative experience. We were beginning to cover the topic of U.S. Westward Expansion during the mid-1800s. Before diving into the content, I wanted to assess the students’ prior knowledge of the topic. Using the MimioMobile app, I was able to get every student in my classroom engaged in the discussion. With a feature known as “Quick Collaborate,” I gave each of my students a blank slide on which to brainstorm. Several of my students used their mobile devices, while others used the classroom’s iPads and MacBooks. Students were asked to write down any facts they knew about the American West. As the students worked on their own devices, each of their contributions was displayed in real time at the front of the classroom. As more and more terms (such as “cowboys,” “rocky mountains,” and “Pacific Ocean”) began to appear on the screen, many students were inspired to offer additional relevant terms (such as “California,” “tumbleweed,” “outlaws,” and “gold”). The brainstorming process became organic, and my students’ collaboration compiled an impressive list of topics we could cover throughout the unit. After the brainstorming ended, we were able to highlight and discuss many of the topics as a group. The best part of this activity was that every student in my classroom participated in building the set of topics that we covered during the follow-up instruction.

I recently witnessed another great example of how an application like the MimioMobile app can be used to facilitate class-wide collaboration, in a fourth grade science classroom. The fourth graders had been working through a unit covering the planets within the solar system. Their teacher had downloaded a solar system lesson from mimioconnect.com, and had used the MimioMobile app to send the lesson out to each of her students’ Chromebooks. Each student was instructed to use the MimioMobile interactive tools to pull a random planet out from behind the sun, which appeared on the left-hand side of their screens. Each of the eight planets was concealed behind the image of the sun. Students were then asked to think of three facts they had learned about the planet they had chosen, and to write them down on the lines provided within the MimioMobile app. Again, all of the students’ contributions were displayed at the front of the room, using the classroom projector. The information each student shared helped to support the other students’ contributions to the activity. Students who had chosen the same planet could collaborate, using the display to compile a more complete list of facts. Following the activity, the class was able to share and discuss all of the information as a group. The information generated was then used to complete a diagram of the solar system for the classroom. The best part about this lesson was that all of those fourth graders knew that they had contributed to the diagram and had collaborated in its creation.

Next Week’s Blog: Other Ed Tech Devices and Tools for Whole-Class Collaboration

Stay tuned for next week’s blog, where we’ll discuss the many ways that interactive white boards, digital displays, and Web 2.0 tools can be used to engage your students in whole-class collaboration.

Learn more about the Mimio app for whole-class collaboration.