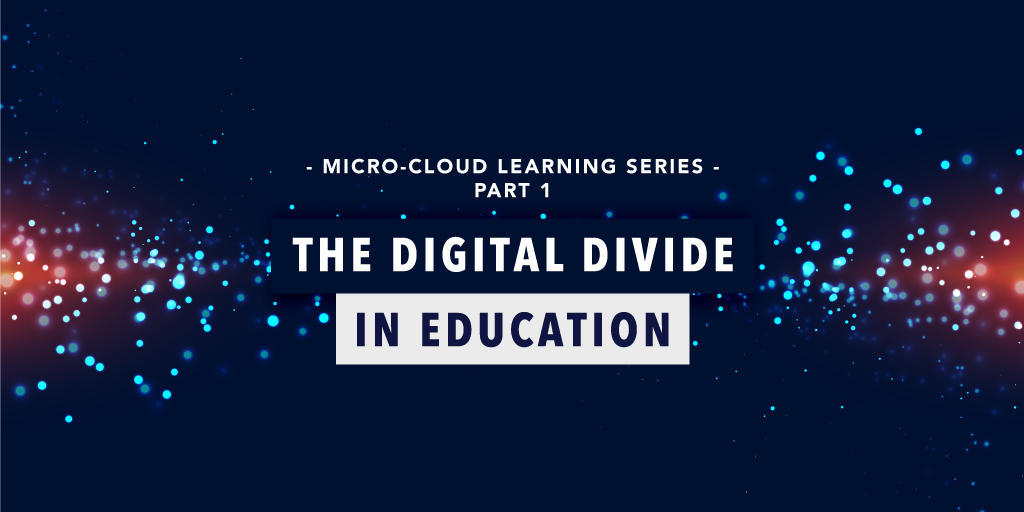 The potential to create a better world through global learning initiatives has never been greater. All of the wisdom and knowledge ever created has been captured, digitized, and catalogued to allow young people to learn and grow faster than ever before. World leaders from both the government and technology sectors have rallied over the last decade to increase learning absorption through e-learning initiatives that put this knowledge at the fingertips of students everywhere in the world.

However, it’s been proven that these efforts can only be optimized in countries with solid infrastructure and ubiquitous high-speed internet connectivity. Nowhere is the “digital divide” more evident than in K-12 education, particularly in the emerging countries where infrastructure and connectivity are still precious resources. In many cases, the government entities have tried to enable the education—possibly with 3G or 4G—but even that connectivity struggles to provide a solid foundation for learning as usage and demand has grown faster than connection speeds.

Consider the case of 4G wireless in a country such as India. According to research published by Quartz, the average 4G LTE speed is 5–6Mbps. While that might sound strong, consider that a single YouTube video in 720P can take almost 1.5Mbps; this means that three students attempting to better their learning with a video lesson can bring the entire school to its knees. In regions like this, even if tech giants donate equipment or ministries of education allocate significant funding, students are often cut off from the cloud-based learning resources enjoyed in the more developed world due to lack of regular or robust connectivity, or other infrastructure limitations such as power outages and fluctuations. The result is frustration from the students, the teachers, and the administration.

The ITU estimates that entering 2016, 3.2B people globally had internet access, yet 4B people in the developing world remained offline—representing two-thirds of the developing world. Specific to the education sector, the United Nations (a number of years ago) endorsed the holding of a World Summit on the Information Society (WSIS) to explore what was required for countries and their citizens to participate in and benefit from the “digital revolution.” Global meetings were held, and a process was put in place to monitor a set of ten related general targets, the second of which was defined as "Connect all secondary and primary schools with ICTs (information and communication technologies)," measured relating to the "proportion of schools with internet access, by type of access (broad vs. narrowband)." This is a key reference point to the question of internet technology penetration in schools worldwide.

The assessment, according to the report from the Partnership on Measuring ICT for Development and the International Telecommunication Union (ITU), is that when it comes to schools, "While internet access has been universally achieved in the majority of European and other OCED countries, internet connectivity is lagging behind in most developing countries. It remains under 10 percent in some countries from all developing regions, including Latin America and the Caribbean, Asia, and Africa ... Analysis has shown that while countries may have some success in building a computer infrastructure, connecting these devices to the internet may lag behind."

Further insight from the World Bank’s Final WSIS Targets Review stated, “The indicator measures the extent of internet access among schools, but does not measure the degree to which it is used for educational purposes, as many schools in developing countries reserve internet for administration. Moreover, the indicators do not measure the quality or speed of internet connectivity, which is known to vary significantly between countries.”

Leveraging Technology to Address the Issue

To combat this global problem, industry leaders are driving an innovative new technology architecture that allows globalized learning on a local level, even in these infrastructure-challenged environments. Based on years of investment in cloud and distributed architecture development in the commercial world, a new topology known as the micro-cloud has emerged. This is seen in offerings such as Netflix’s Open Connect appliances, Accelerator for YouTube, content repository managers for the enterprise, and the emergence of hybrid IT in large enterprises. In this sector, the development is known as the micro-cloud learning environment, a completely self-contained but cloud-enabled e-learning environment that allows students and teachers access to cloud-based learning management systems, curriculum, content, and resources—even when the school has no connectivity or power. With this innovative approach, the learning infrastructure, as well as the curriculum, content, and resources, are staged on the micro-cloud platform in the school.

The challenge for educational institutions is that this type of hybrid/distributed architecture tends to require specialized IT knowledge and complex infrastructure in order to create a workable topology; schools and universities don’t tend to have such depth in IT staffing and budget. However, a new approach to micro-cloud e-learning now allows all the required services to be integrated into a single plug-and-play micro-cloud appliance, allowing any school to benefit from this architecture—and providing teachers and students with greater access to digital knowledge.

With micro-cloud architecture, students connect on a local Wi-Fi that appears to be an internet connection, hence the ability to use a cloud-based e-learning paradigm even in a school without power. The learning management system, content, and valuable incremental resources (such as YouTube, simulators, interactive maps, Wikipedia, etc.) are housed locally in the micro-cloud. In this scenario, students progress through the learning process without knowing (or needing to know) if there’s any actual internet connectivity to the school at any point in time. 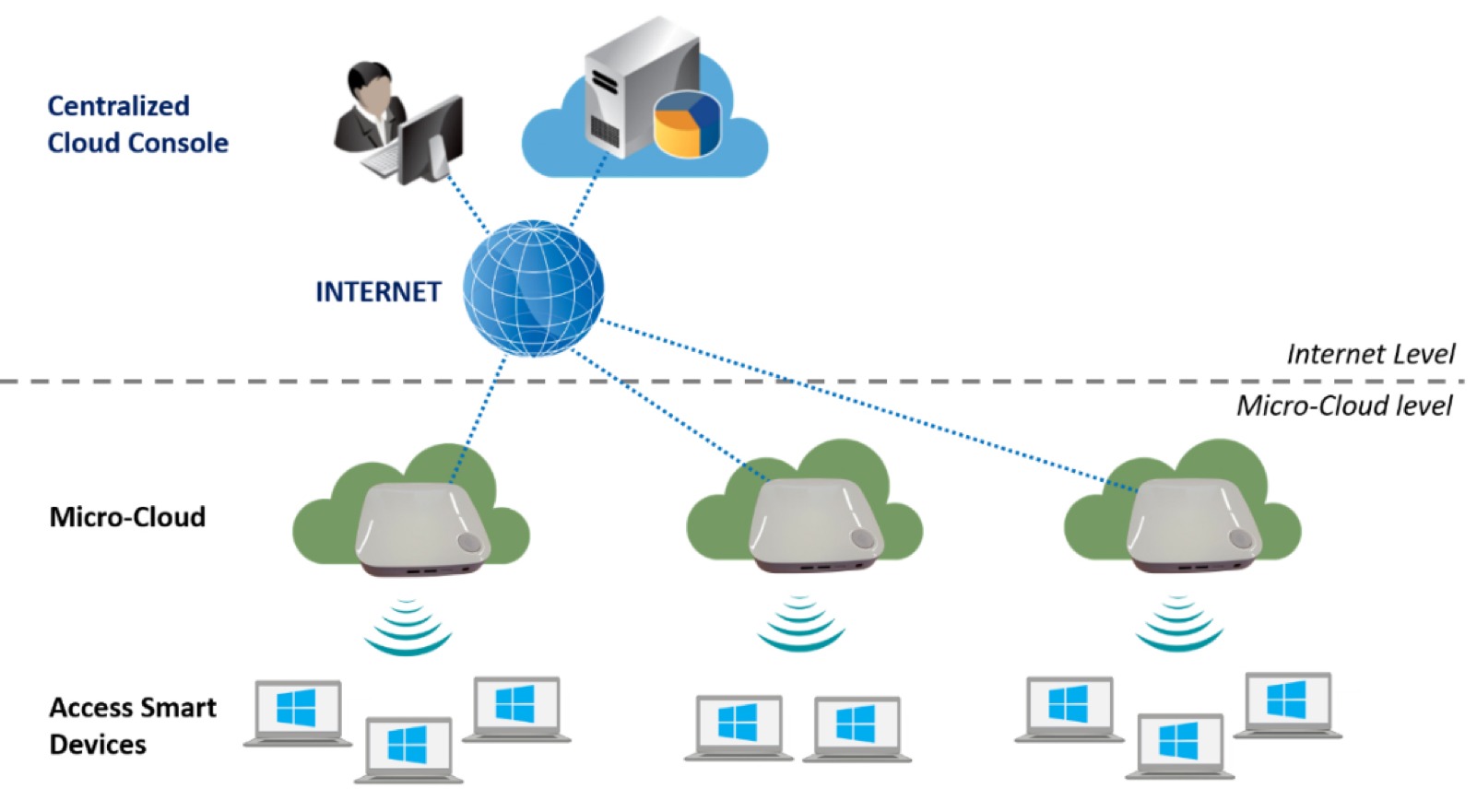 Most importantly, with the micro-cloud architecture, hundreds or even thousands of micro-clouds throughout the region/country can be managed and administered from a single, centralized point. The administration or ministry of education can curate uniform curriculum and content, which is then populated to the micro-clouds whenever a sporadic connection becomes available.

The impact is just as great, or even greater, on teachers worldwide. A massive percentage of committed educators globally simply lack the resources to become educated on the latest teaching paradigms, methods, and curriculum. The micro-cloud delivers to a school administrator or teacher in an urban or remote area—who may have never left their village—the chance to leverage state-of-the-art LMS technology and student/class management tools right at their desks.

Want to learn more about how micro-cloud learning can aid students and educators across the globe? Register for our upcoming webinar, Innovations Bringing STEM and Robotics to Today’s Classrooms.