Practicing Counterarguments in the Classroom 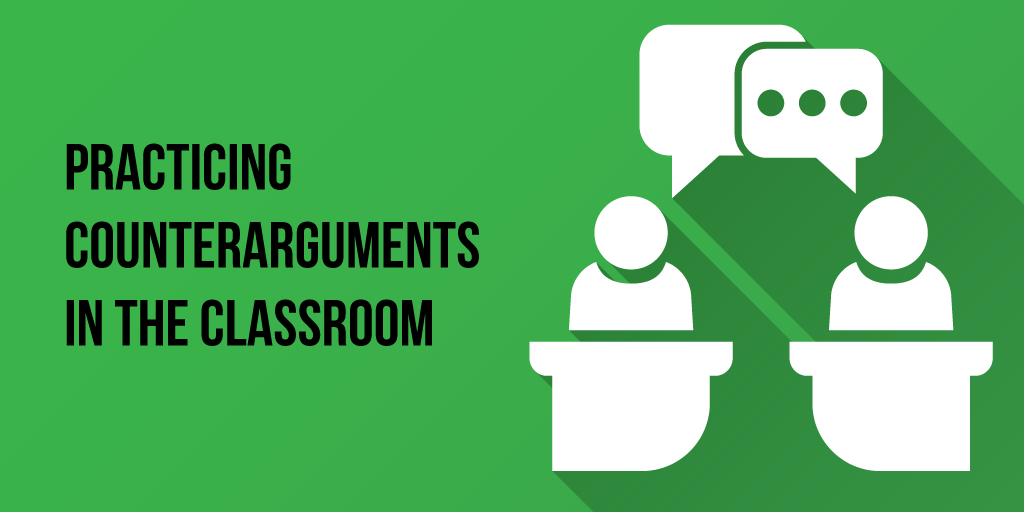 Students should argue more in the classroom. You may be thinking, “Wait...what?” as you read that. Most teachers probably think their students argue enough already, but constructing an argument in the academic sense is one of the important Common Core standards. This isn’t a traditional “you cut in front of me in line” argument, but one that is written to “argue” a point of view about a topic.

The Common Core standards require for students starting around fifth grade to be able to respond to a counterargument in addition to creating an argument of their own. This can be a hard skill both to teach and to practice. Many of us would say that this is a lost art in the current political and cultural state of our country. Not because counterarguments are scarce, but because considering the other point of view for a topic is not as common as it used to be.

To that end, thinking about counterarguments can create a sense of both empathy and perspective within the classroom. By giving students a pro-con concept, assigning them a topic to defend it helps them to see the other side. There are some simple ways to approach teaching counterarguments that are relevant to students and would allow them to create empathy without creating too much controversy.

For starters, teachers must define argument and counterargument. This is probably most true for younger students, as the idea of an argument being something that is respectfully discussed on paper might be a new concept to them. The word argument definitely has a context throughout our culture, so it’s important for teachers to use examples of what an argument means, as well as what a counterargument looks like.

A highly effective strategy when introducing this concept is to give some examples or model a student’s work. Students can read through an argument paper that another student has written and highlight the areas where the counterargument is considered. This helps them to see how an author weaves it into their narrative and not only defines the counterargument, but then rebuts it.

For some students, writing the counterargument isn't the real difficulty. What they find most hard is to even consider what counterarguments might be to something that they firmly believe in and agree with. There might need to be some research that comes into play in this area—some students might really have to work to study what others think about a topic.

Diving Into the Issues

When it comes to doing this in a classroom, teachers might shy away because certain topics can become so controversial. Keeping the topics localized helps to avoid large controversies. Students often find issues of the school more relevant than issues of politics or law. Dress code, lunch issues, or even teaching factors are good places for students to start when teaching about arguments. They might have to ask a teacher or principal to find counterarguments, which could result in them understanding the larger context of an issue.

But just because something is controversial doesn't mean teachers should avoid it. It is appropriate at times to allow students to pick a side, so to speak, when talking about an issue. In order to really cultivate the sense of what it's like to consider a counterargument, teachers can assign students to defend a certain point of view on an issue. By being forced to come up with supportive arguments for something they might not agree with, a student will understand how to better consider counterarguments.

To become a little philosophical for just a moment, I would like to point out how critically important this is for our students to learn. In order for a democracy to thrive, we must have the ability to articulate arguments and listen to counterarguments. So much of our world today—as depicted in all kinds of media—lacks the time or the value of listening to counterarguments. This vital skill helps all of us to empathize with one another, and to draw better and more thoughtful conclusions.

So as a teacher, I hope this article has helped you to understand not only how to approach counterarguments in the classroom, but also why it is so important. It isn’t just a matter of teaching a standard, but more of an approach to how we interact and listen to one another. Whether the issue is big or small, students can begin to see how others might see the world differently than they do.

The school year may be coming to an end, but that doesn’t mean the learning has to! Keep up with professional development over the summer break with Boxlight's range of engaging, differentiated PD designed to help teachers improve student outcomes. Plus, you can earn your MimioStudio™ educator-level certification at 50% off the regular price for a limited time. Click here to learn more!