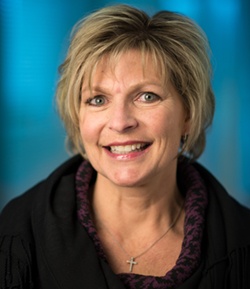 Situated in one of the lowest-funded school districts in California, Ethel Dwyer Middle School is a Huntington Beach icon. Built in the 1930s, the school’s principals were historically focused more on coaching teachers and encouraging success than on the actual teaching, learning, and staff management.

That changed when Christa Glembocki moved into the principal role a few years ago. “I wanted to set the stage for working as a team,” she says, “and being there for the betterment of our students.”

A Change Is in the Air 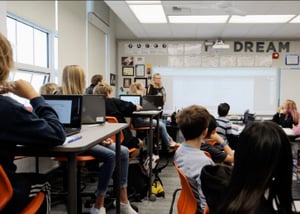 When Glembocki joined Ethel Dwyer Middle School’s leadership team, some pockets of learning were very old school and traditional, such as rows of desks where students worked silently, answering questions from textbooks. “The teacher called on one student at a time and everyone else just sat there,” says Glembocki. “Overall, the school wasn’t moving ahead with 21st century learning, nor was it incorporating everything that we needed to with the P21 framework that we were working toward.”

Exposed to the Partnership for 21st Century Learning (P21)—a national nonprofit organization that advocates for 21st century readiness for every student—in previous positions, Glembocki knew that the system’s foundation was built on good teaching and learning fundamentals. “21st century learning isn’t about accessing and memorizing information; it’s about knowing how to apply that information through problem solving and critical thinking,” says Glembocki. “That’s what our kids need in order to go out and get the jobs of today, and the jobs of tomorrow that we don't even know exist.”

When Huntington Beach City School District passed a bond that allowed it to redesign its learning spaces, Glembocki had a voice in what her school’s classrooms and learning spaces should look like. She wanted the spaces to incorporate built-in interactive technology along with furniture that gave students a choice in how they wanted to learn. “It's as simple as a student feeling more comfortable in a space all the way to let's move the learning out of the classroom,” she says.

In its classrooms, the school installed Boxlight interactive flat panel displays that teachers use to project classroom information, mirror student work, and allow students to write on. “Teachers are using the flat panels in many different innovative ways,” says Glembocki, “and students can pull up to them with a table, plug in their Chromebooks, and collaborate with one another.”

Looking ahead, Glembocki expects Ethel Dwyer Middle School’s commitment to creating 21st century learning environments supported by the P21 framework and advanced technology tools to gain momentum. “We’re building a culture where students and teachers feel like they're part of a bigger community,” she says. “To me, that's what it's all about.”