Using Google Chromecast in the Classroom 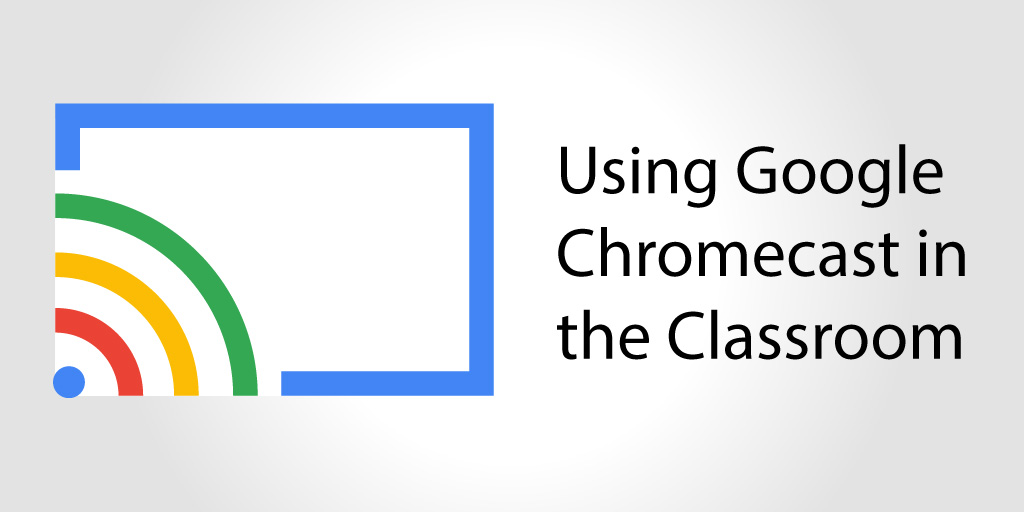 Over the past five years, many school districts—including the one where I work—have transitioned from iPads to Chromebooks. There are some advantages to having done this, but there are also some drawbacks. Many of the decisions in making this change have hinged on money and the cost difference between a Chromebook and an iPad. When it comes to most decisions that involve cost, we get what we pay for. In moving away from the Apple iOS to Google, we found that we lost some options for teachers displaying from their screen.

We have discovered this year that the ability to use AirPlay has somewhat hindered us. This was a built-in feature with iPads—it came with the administration software that we owned. This system wasn’t the most user-friendly, but it did make casting to a projector very easy for teachers. With Chromebooks, this isn’t as easy. There is a need to install an ancillary device, called a Chromecast, in order to do the same thing. And even after doing so, the functionality is not quite the same.

Making It Work
The process of “Chromecasting” is actually very easy. Many of us have already used the same technology on a computer or TV at home—it works the same way with a mounted projector. The Chromecast can be installed into the projector and once linked to the network, any device in the room can be cast to it, assuming it's on the same network. The network setup can impact how this works for teachers since the Chromecast has to be on the same network as the devices that are casting to it.

This network challenge can become more complicated if student devices use the same network. If this is the case, then those devices can openly cast to the projectors as well. Keeping students on a separate student network, which is how most school networks are mapped, helps to prevent this issue. It is also possible to disable Chromebooks so that they cannot cast in order to avoid unwanted student interference in Chromecasting.

Another challenge for us as we moved away from iPads was the difference in security between the two devices. The network solution mentioned above is one option, but with AirPlay, we didn’t need to worry about the networks. One of the main advantages to AirPlay (or Apple TV, which can do the same thing), is that the teacher can control who can display to their projector or computer by entering a code to allow access. With our Chromecast setup, there is no security to control access, so it is open to everyone who is on the same network. Essentially, any teacher can cast to any Chromecast as long as it is powered on.

The final challenge that we discovered as we transitioned came from the projectors themselves. The Chromecast plugs directly into a device, and the new models power themselves through the projector and don’t need to be plugged into a separate electrical outlet. But across our district, we had some older projectors that didn’t have the right ports (HDMI was needed), so we realized we had to replace some of the projectors along the way. Again, more hidden costs that we didn’t anticipate when we moved from iPads to Chromebooks.

An Easy, Reliable Option
The frequency of use of the Chromecasts in classrooms has been very high. Teachers have quickly become accustomed to casting from their Chromebooks and have found it easy and reliable. Our teachers have convertible Chromebooks that allow them to walk around the room and make notations on the screen as they would on a tablet. It is easy, useful, and allows the teacher to be mobile around the room.

Some of the concerns that were brought up earlier have limited how we could have students cast. Because they are on different networks, we have had to find a few workarounds in order to display students’ work on the projector. One way we have done this is to have students complete work in Google Classroom so teachers can access and display from their teacher device. Another idea, which takes a few more steps, is to allow the student to log in to the teacher device and just use it as their own when presenting. The downside to this is that only one device in the room is able to cast at once, so there is a lot of logging in and logging out.

Overall, we are happy with the transition and how the technology is being used in classrooms around the district, but we did find a few pitfalls along the way. By sharing our experience, I hope that you can make a good, informed, student-centered decision if you’re looking to install them in your classrooms.

Use ProColor displays in your classroom? You may already have the technology you need to screen cast with almost any device. Learn more here.>>